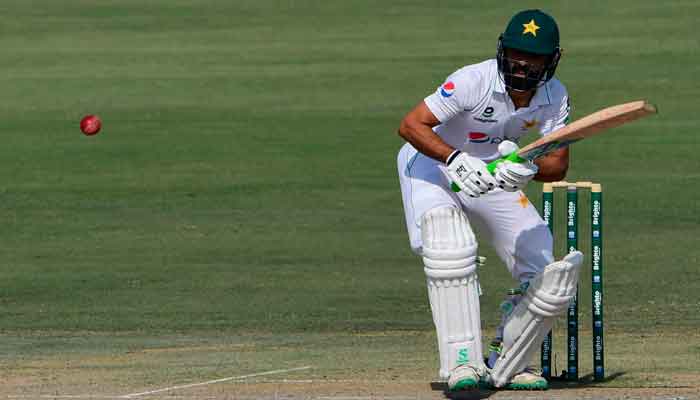 A 123-run partnership between Captain Babar Azam of Pakistan and Test Cricket Hero Fawad Alam of Karachi steadied the hosts from 22 to 3. They set them up for a sizeable first-innings score held a depleted South African assault at bay.

From the 23rd over, South Africa was without one of its two frontline spinners, George Linde, after being forced off the field with a minor finger injury to his bowling attack. In his follow-through, Linde injured himself trying to field a ball. And he was taken for an x-ray that showed no fracture. He was seen on the sidelines 10 minutes before the tea warmed up working on his grip. But he did not return to play for the rest of the day.

For Keshav Maharaj, who bowled 25 overs almost without a break, that meant a heavier workload. The first spell of Maharaj, 19 overs, straddled the first and second sessions. And then he was given a break over to change ends, six overs into his tea spell. Probably, it was the most effective of the visiting attack.

Maharaj was introduced in the eighth. So, he should have had a wicket with his first ball when Imran Butt was pushed forward to defend a delivery that turned away and took the edge. But Temba Bavuma put it down first slip. Maharaj later caught Butt behind to end the opening stand of Pakistan on 21. The over after dismissing Azhar Ali lbw for a duck, and Anrich Nortje got rid of Abid Ali on the other end. Thanks to a stunning short-legged grab by Aiden Markram, who was diving low to his right.

But no other inroads were made by South Africa; Azam and Alam dug in, and after it gave a significant turn in the morning, the surface seemed to settle. South Africa ended up alternating Kagiso Rabada and Nortje after opening with their seamers. Thus, giving all-rounder Wiaan Mulder only five overs. There was not so much for the rapids. The pitch demands patience from the batsmen, as predicted, something Alam has in stable supply. Although the scoring rate hovered around 2.50, it never seemed impossible to find runs, particularly not for Azam.

The Captain Of Pakistan

Before this match, the captain of Pakistan played two test innings in Rawalpindi and scored a hundred on both occasions. The signs that he could convert again are there. BABAR AZAM began cutting with back-to-back boundaries off Maharaj, unlike Alam, who was watchful at the outset. His 12 fours featured a range of drives and a whip through the waist to meet his fifty, from 81 deliveries. The ease with which he scored runs all over the field is a hallmark of Azam’s innings and the lackluster effort of South Africa so far – 45 on the offside and 32 on the leg side.

Compared to the way he batted in Karachi, Alam also favored the offside more and offered a perfect foil. He left the ball well and, in his innings, faced 114 dot balls with defying a fast-despairing South African attack. South Africa was significantly quieter than usual in the area. Many senior players spent time out of the park, including Rassie van der Dussen, Dean Elgar, and FAF du Plessis. There was no stomach bug going around, the team management confirmed, so one can only presume that they either got tactical advice or needed a bit of a break from BABAR AZAM.

See also  Moving ahead at COVID-19 times: Pakistan has not so far applied for G20 debt relief

When play did not resume after tea as a persistent rain fell for an hour after the break, they got an extended one. The covers came off momentarily, and an inspection was done, but on day two, it was agreed to restart play 15 minutes earlier.