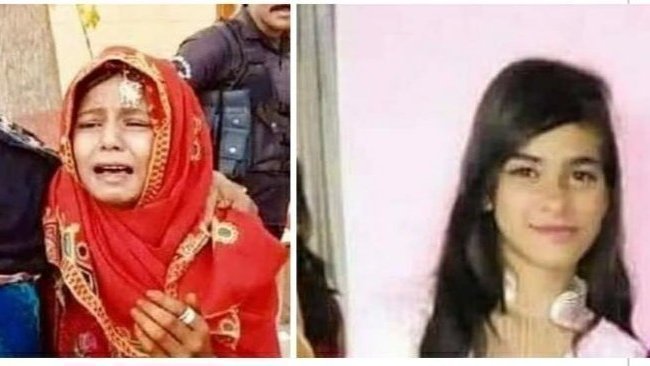 Medical experts have said that Arzoo Raja, a teenager from Karachi at the core of a forced conversion and marriage case, is not older than 14 years, prompting judges to declare that it will then seem to be a child marriage.
The parents of Arzoo say she was abducted from home, converted, and married to Syed Ali Azhar, 41. He says that she converted and matched him with a free will of her own.
When Arzoo claimed she was 18, the court formed a five-member board to determine her age. The parents of Arzoo said she is 13 years old and submitted NADRA papers to support this. The court found the records to be accurate and stated that this appears to be a child marriage case. In Sindh, the law prohibits the marriage of anyone less than 18 years of age. What has yet to be determined is whether Arzoo has converted freely.
At the hearing Monday, Justice Muhammad Karim Khan Agha and Justice Kausar Sultana Hussain asked Arzoo if she would like to meet her parents. She was taken to court, surrounded by female police officers. She told the adjudicators she needed her better half to be with her. He is in police detention until November 10.
Arzoo was asked by Justice Agha if there was any strain on her or if she had been abducted. “Tears began to stream down her cheeks as she responded,” I have converted from my free will to Islam, and I want to meet my husband.
For two weeks, the court sent her home to a shelter and barred Ali from meeting her. It ruled that under the Child Marriages Restraint Act, 2013, each person involved in the nikkah ceremony will be investigated.
According to Jibran Nasir, who represents her parents, the government is paying for Arzoo’s education and expenses at the shelter home, and no one is permitted to visit her unless they have the court’s permission. Her parents said they only wanted to see their daughter once and hoped the law would support them.
A Christian social worker commented when speaking to the media after the hearing, “We thank the court for its cooperation and hope that people who pursue justice in such cases get it.”
The case was adjourned until November 23.
History of the event
Raja Masih, the teenager’s father, filed an FIR on October 13 after she was kidnapped from her Railway Colony home. She was found to have been married to Syed Ali Azhar by the police. For his part, Azhar submitted a Nikkahnama, a free-will affidavit, and a certificate from Sanad-e-Islam.
Her parents then addressed a judge in court requesting her protective custody. They argued that under Section 375 of the Pakistan Penal Code and Section 5 of the Protection of Women (Criminal Laws Amendment) Act, 2006, child marriage consummation is equivalent to statutory rape and is prohibited.
Nikkahnama does not have any knowledge about her age or a copy of the CNIC. It does not have the medical certificate necessary to show that a person is 18 if there is no CNIC.
Arzoo’s parents state that on October 27, she was compelled to file a petition in the Sindh High Court, alleging that she had married Ali of her own free will and had converted to Islam. On November 2, on the Sindh High Court’s orders, she was recovered and moved to a shelter home. Her husband was arrested and taken into custody by the police.