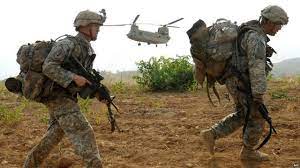 The heroic struggle of a warrior never ends.

The heroic struggle |Texas’s Joint Base San Antonio-Fort Sam Master Sgt. Kathryan Torres, U.S. Army South’s lead sexual assault response coordinator, cried as she sat in her office reflecting on her life’s path to becoming a soldier and the tragic death of her father.

Torres commented, “Despite the fact that we didn’t necessarily in every case concur, my father was the most propelling individual for me.Young and hardly able to speak English, he fled Puerto Rico for California to follow his goals.

Torres, the middle child of three sisters, inherited her father’s sense of adventure.
Torres, who is from Fajardo, Puerto Rico, preferred athletics and the outdoors over her sisters’ interests in socialising and going out.

She smiled innocently and added, “I just wanted to be outside, climbing trees, playing sports, and getting messy.

Despite the fact that her parents split when she was a little child, Torres had wonderful yet opposing role models in the form of her wandering father and her stable mother.

As the only parent who raised her and her sisters, her mother worked nights at Roosevelt Roads Naval Station while her girls slept. Torres took on the responsibility of looking after her younger sister while her mother slept during the day.

My younger sister views me as her second mother because my elder sister moved in with our grandma, Torres remarked with pride. I helped out a lot around the house and in the yard, and by the time I was seven, I could prepare a whole supper.

Her parents have a strong emphasis on education both within and outside the family. Her father encouraged them to complete a university degree, while her mother urged them to speak perfect English at home.

Torres received a scholarship to a university in Puerto Rico when she completed high school at the age of 17, but her father persuaded her to enrol at Mount Saint Mary’s University in California, where he worked.
It was really tough for me to decide to leave behind everyone and everything I knew and loved, and the collegiate atmosphere completely overwhelmed me,” stated Torres. It was certainly not what I had anticipated, so I stayed there for approximately a semester before returning to Puerto Rico.

She started working as a manager of a grocery store and doing cosmetology in a neighbourhood barbershop, but after a few years she became dissatisfied with her direction in life.

I wasn’t hanging out with a decent crowd being back home, she said. People that I knew and had grown up with were being killed, going to jail for drug offences, or both. I had one of those times where I said, “What am I doing here when I have so much more to offer?”

According to Torres, she has always wished to join the military or work for the Federal Bureau of Investigation or Drug Enforcement Agency. She realised that joining the Army was the quickest route out of the difficult circumstances she was in.

She enrolled in the military in September 2005 as an ammunition specialist and left as soon as she could for basic combat training (BCT).

My first duty location after completing BCT and AIT was Fort Carson, Colorado, and I arrived there in February, Torres added hurriedly. “I left Puerto Rico wearing a tank top, shorts, and flip-flops since I had never experienced winter. The pilot said that Colorado Springs’ temperature was nine degrees just before we touched down.

Torres went to Iraq in support of Operation Iraqi Freedom in October 2006 and again in June 2010.

She learned a lot about the individuals she surrounded herself with throughout her deployments.

She said: “What I learnt most was that whether it’s family or war buddies, the people you need behind you in fight and in life are always going to be there. You must develop the ability to rely on them.

Due to the birth of her kid, Torres claimed that her first deployment was substantially different from her second.
My parents continued pleading with me not to go over there and be a hero because they understood that is who I am as a person, she said. “My most memorable organization I was on a forward working site in Southeast Baghdad,” she added. “The second time, my son wasn’t even two years old, but I was on a personal security detachment and spent a lot of time travelling. Being apart from him was really difficult.

The father of her son, who was also serving in Iraq at the time, developed a serious case of meningitis. She was unable to get information on his whereabouts because of security issues in the area.

In addition to the pressure of finishing the task, there was a lot to cope with, said Torres. “I thought a ton all through that sending since I was the back vehicle leader and my team maintained that me should be engaged before we left the entryway. I discovered that I could endure much more stress than I ever expected while still performing well in a battle situation.