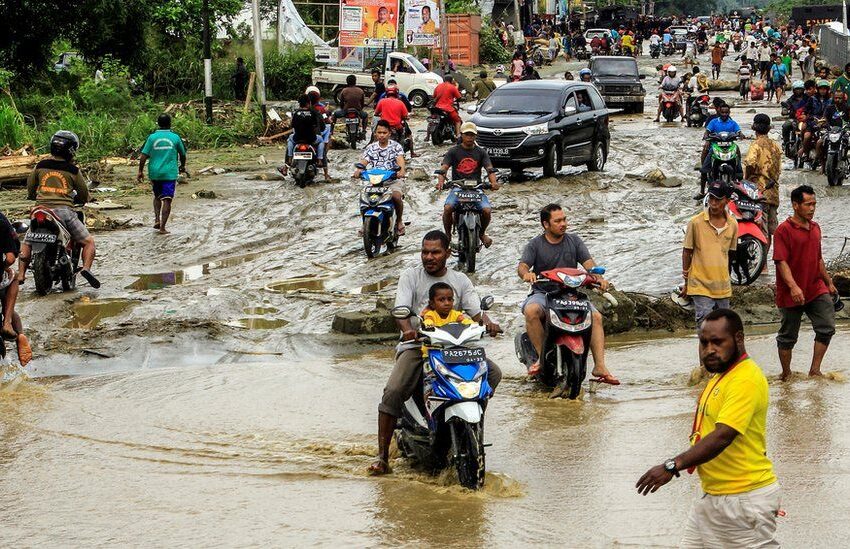 SEVERE FLOODS IN INDONESIA- ABOUT 2000 PEOPLE EVACUATED THEIR HOMES

World News: Indonesian Island of Sumatra has suffered from a flood and landslide on Sunday, 28th April 2019. The authorities said that the flood was caused due to the heavy rain in which 17 people are dead and nine has gone missing. These floods are said to be common in Indonesia in monsoon seasons while the rains strike the Southeast Asian Archipelago between the months of October and April.
Moreover, this weather disaster has affected about nine districts and towns across the Bengkulu province in Indonesia which has damaged hundreds of houses, buildings, bridges, and roads,  about 12000 people have been moved out of the place.
Sutopo Purwo Nugroho- a spokesman of National Disaster Agency Indonesia explained that if the rainfall remains high, the disaster’s influence may increase and the landslides & floods can occur again. He further exclaimed with grief that if a Secondary disaster happens to come, the people might suffer from some serious skin diseases, respiratory infections due to bad hygiene because in such a condition the supply of clean water would be impossible.
Mr. Nugroho also talked about the safety majors and the assisting resources to the sufferers. The catering and shelter have been provided to move out people (about 12000) and still secure and hard to hit areas are being looked for via rubber boats. And the people are also being given first aid services and the heavy machinery to clear the waste spread on the roads.
Moreover, the officials also informed that as the water was high in Jakarta-Capital city of Indonesia about two people which compelled Bogor citizens to free about 14 Pythons of which 4metres/13feet 6 snakes have been caught while the other eight are still out of reach.

See also   James Bond should be British and black