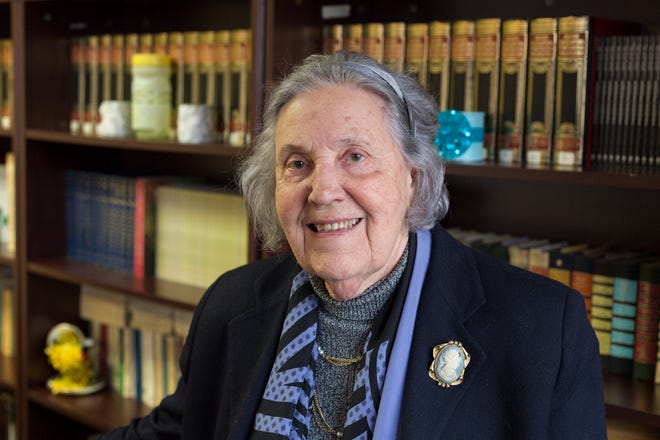 MAPS Board of Directors, passed away recently.

Carmen Medeiros, a long-serving member of the MAPS Board of Directors, passed away recently.
CAMBRIDGE, MASSACHUSETTS – Carmen Pacheco Medeiros, a community activist and educator who served on the Massachusetts Alliance of Portuguese Speakers (MAPS) Board of Directors for the past 20 years and was instrumental in the organization’s early years, has died.

Medeiros died peacefully on Tuesday, May 31, 2022, at the age of 89, surrounded by her family.
“I’m glad for the many good memories of Carmen’s beautiful laughter, warm embraces, and great love of life and people around her,” MAPS Executive Director Paulo Pinto stated.

“As a proud teacher and a founding and lifelong member of the MAPS Board of Directors, I will be eternally thankful to her for her career of committed service to our community.” She adored MAPS and looked forward to the discussions at our Board meetings, lunches with our seniors, and getting dressed up for our yearly Galas.”
Medeiros was born on October 23, 1932, in Vila Franca do Campo, So Miguel, Azores, and came to the United States at the age of 20. She married Joseph Medeiros shortly after, and they had five children as she continued her academic career. She began her studies at Boston State College and graduated from Boston University with a Master’s degree in Education. She worked at the Harrington School for Girls as a kindergarten teacher.

Following her retirement, Medeiros devoted herself to a variety of social issues, particularly among her adopted Portuguese community. She quickly returned to the MAPS Board of Directors, where she had served as a feisty and dedicated community champion for the previous 20 years.
Susan Pacheco, President of the MAPS Board of Directors, stated, “She was a force of nature and a role model of what it means to assist your community, not just as a board member and volunteer but throughout her professional career as well.” “Her death has made our community poorer today.” We express our heartfelt sympathies to her family and friends. Her companionship, wit, devotion, and inspiring love for social work will be sorely missed.”

See also  Is Darren Sammy planning to convert to Islam?

Medeiros was a source of comfort and reassurance to many families and children throughout her many years as an educator, including MAPS Board Member Patricia De Oliveira.

“When my family relocated from Brazil to Cambridge, Carmen was there to greet us at our new school and provide vital information in Portuguese to newly arriving families. “I recall her congratulating her students whenever they learnt a new English word or phrase,” she recounted. “As a fellow MAPS board member, I felt the same enthusiasm for her community’s achievement. Carmen will always be a shining example of what it means to belong to a group.”

Mrs. Medeiros’ memorial ceremony will be conducted at 11 a.m. on Saturday, June 11 at St. Anthony’s Church, 400 Cardinal Medeiros Avenue in Cambridge. Instead of flowers, her family has requested that condolences be offered in the form of donations to her beloved MAPS, which may be found at 1046 Cambridge Street, Cambridge, MA 02139.

Since 1970, MAPS has provided services to the Portuguese-speaking populations of Massachusetts and elsewhere. The organization’s six locations in Cambridge, Somerville, Brighton, Dorchester, Framingham, and Lowell provide a comprehensive range of free health and social services.