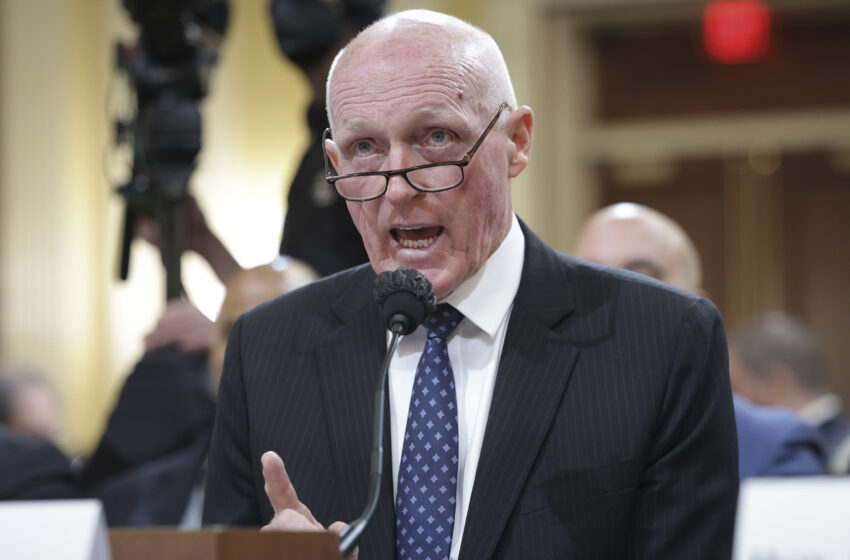 WASHINGTON, DC - JUNE 21: Rusty Bowers, Arizona House Speaker, testifies during the fourth hearing on the January 6th investigation in the Cannon House Office Building on June 21, 2022 in Washington, DC. The bipartisan committee, which has been gathering evidence for almost a year related to the January 6 attack at the U.S. Capitol, is presenting its findings in a series of televised hearings. On January 6, 2021, supporters of former President Donald Trump attacked the U.S. Capitol Building during an attempt to disrupt a congressional vote to confirm the electoral college win for President Joe Biden. (Photo by Kevin Dietsch/Getty Images)

Rusty Bowers, an Arizona senator, talks about the pressure Trump and Giuliani put on him.

Bowers stated that Giuliani informed him of accusations of voting fraud involving unauthorised immigrants or persons who had died but were registered as having voted.

Bowers said he and other Republican legislators pressed Giuliani to explain the ideas and offer enough proof to justify recalling the state’s presidential electors.

“He responded, ‘We have tonnes of hypotheses, but we don’t have the evidence,'” Bowers recalled Giuliani saying.

Bowers said Giuliani pressed him to bring the Arizona legislature back into session — something he maintained he couldn’t do unilaterally — in order to recall the electors who would have gone to President Biden if he had won the state.

He became extremely upset as he remarked, “It is a cornerstone of my faith that the Constitution is divinely inspired.” “I’m not going to do that.”

He claimed he was requested by the former president to convene a hearing to look into charges of fraud in Arizona, but he didn’t think the evidence “merited a hearing.”

“He told Trump and Giuliani, “You are asking me to do something against my oath, and I will not breach my oath,” to which the former New York mayor responded, “Aren’t we all Republicans here?” I believe we would have a more favourable response.”
During a phone chat with Bowers, lawyer John Eastman exerted pressure on him, pushing him to schedule a vote in the legislature to decertify the state’s electors.

“His advice was that we do it,” Bowers claimed, adding that Eastman put pressure on him by asking him to “just do it and let the courts figure it out.”

Bowers told the committee that his office had received over 20,000 emails, thousands of voicemails, and hundreds of SMS from people who thought he was wrong not to recall the voters.

“Up until lately, worrying about what will happen on Saturdays was a new trend in our life,” he remarked of his family. “Because we have a variety of visitors.”

Video trucks screaming loudspeakers and frightening Bowers and his neighbours accuse him of being a paedophile and a corrupt politician.

He became tearful again as he remarked, “It was upsetting.”