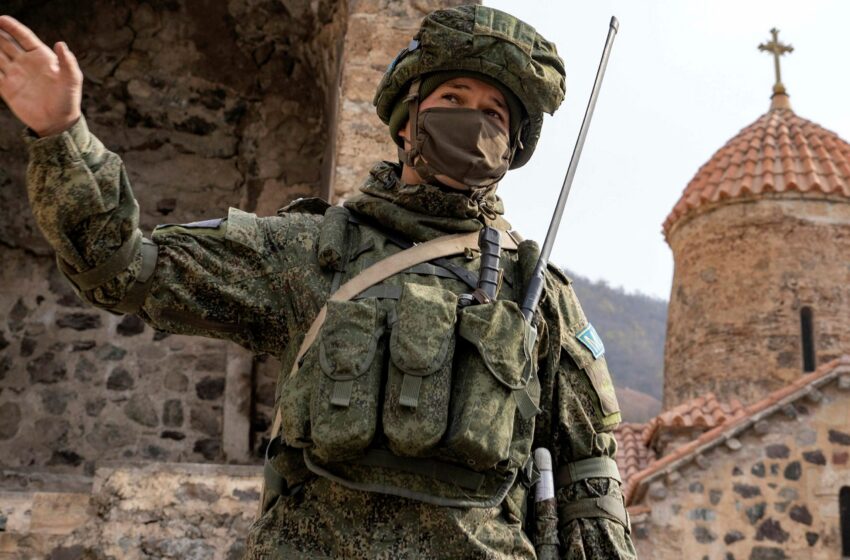 RUSSIA REPORTS THAT THE FIRST PEACEKEEPERS DEPLOYED TO THE KARABAKH AREA

As part of a peace deal to end weeks of fighting between Armenia and Azerbaijan over the disputed province, Russian peacekeepers have deployed to the Nagorno-Karabakh region, the military said Wednesday, RUSSIA REPORTS.
The Main Operational Directorate of the Russian General Staff, Sergei Rudskoy, said that the peacekeepers were now in charge of the Lachin corridor, a crucial link between Armenia and the Nagorno-Karabakh breakaway region.
Four hundred fourteen troops, eight helicopters, and hundreds of vehicles and equipment had arrived in Armenia earlier, he said.
“In the past 24 hours, twenty-seven sorties have been made,” he told reporters.
Rudskoy reported that almost all of the peacekeeping mission servicemen had prior experience with humanitarian deployments in Syria.
Under the Russian-brokered Armenia-Azerbaijan Agreement, 16 observation points will be installed along the contact line in the area of Nagorno-Karabakh and Lachin’s corridor Rudskoy said, RUSSIA REPORTS.
Military police, he said, will also be deployed.
According to Rudskoy, the Russian army was in “constant contact” with the military leadership in Azerbaijan and Armenia to avoid any accidents and ensure Russian peacekeepers’ safety.
In the early hours of Tuesday, Armenian Prime Minister NikolPashinyan, Azerbaijani President IlhamAliyev, and Russian President Vladimir Putin announced the agreement.
The agreement came after Azerbaijan’s series of successes in its struggle to reclaim the Armenian ethnic enclave that had proclaimed autonomy almost 30 years earlier.
For a renewable five-year mission, a Russian force of 1,960 military personnel and 90 armored personnel carriers will deploy to the area as peacekeepers.
Main ally Turkey will also be active in peacekeeping operations, Aliyev said.

See also  The battle against science inside the US Supreme Court