RAMY OR STONING ACT PLAYED BY THE PILGRIMS 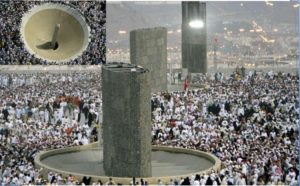 Islam which is called a complete code of life has five basic pillars of which Pilgrimage is the fifth.

Every year Muslims throughout the globe pay an obligatory visit to the Holy place of Makkah called the “pilgrimage (Hajj)” in the last Islamic month Zil-Hajj.

The Muslims who are stable in regards to mental and physical health and wealth to bear the expenses have to perform the pilgrimage at least once in their lifetime.

There are many Rituals of performing pilgrimage among which “Ramy or Stoning” is the one. It is a Sunnah of Prophet Ibrahim (A.S) and performing of this act is to commemorate Him.

The history of this ritual comes from the time of Prophet Ibrahim (A.S) when Al-Mighty Allah asked Him to sacrifice His beloved son Prophet Ismael (A.S) to get the blessings.

While on the way of the devil (Satan) teased and tried to distract Him of His will but He didn’t listen to its evils and pelt it.

In Mina- the tent city in Makkah, there are three pillars made on those three spots where the devil stood in the way of Hazrat Ibrahim (A.S) and these pillars are called Jamarat collectively but individually they are named as:

The pilgrims collect 70 stones a night before the performance of this ritual “Ramy” in Muzdalifah and on the 10th of Zil-Hajj they participate in this stoning ritual in Mina.

This ritual continues for three days i.e. 10th, 11th, & 12th of Zil-Hajj and they are supposed to leave Makkah before the sunset of the third day.

This activity where there is a religious act at the same time it also plays a role to control one’s unwanted low desires and wishes.

After a 0-0 draw on Tuesday, Achraf Hakimi converted the go-ahead penalty to propel