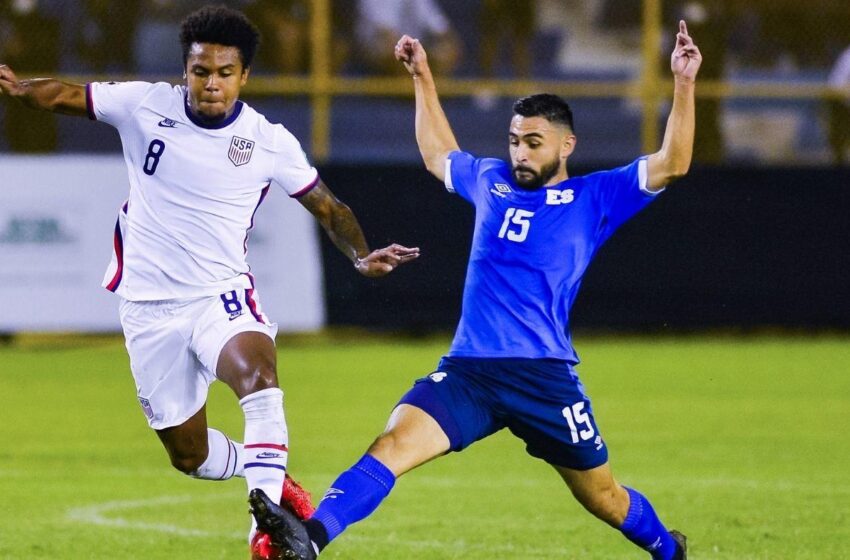 The United States‘ preparation for the 2022 World Cup begins with a CONCACAF Nations League match against El Salvador.

On Friday night, Gregg Berhalter led the USMNT to a 5-0 victory over Grenada in Austin, with Jesus Ferreira scoring four goals and his FC Dallas colleague Paul Arriola scoring the other. The US manager has previously stated that he will rotate the group for the journey to El Salvador, allowing other players to shine.
Nations League The United States has struggled on the road in CONCACAF play in recent years, garnering only six points in seven World Cup qualifying away matches.

76th minute: The game has finally reached a boiling point. Tyler Adams engages Cerin in a 50-50 contest and slams the El Salvador veteran to the ground. Both sides collide in a brawl, with many yellow cards being issued. Christian Pulisic was brought in to separate players, but he ended up becoming involved.
In the aftermath, Tyler Adams was given a well-deserved yellow card, but the remainder of the punishment is still unknown.

It’s a surprising choice. Arriola does not use his studs in a harmful or malicious manner. There’s no way that’s anything other than a yellow for a late tackle. A red card is as severe as it gets for what this referee has done today. For the last 20 minutes, the US is down to ten men and down by a goal in the mud.
Minute 68: El Salvador gets another opportunity as attacker Nelson Bonilla is substituted by Cristian Gil. Bonilla was a thorn in the side, but he had faded since halftime. He expresses his displeasure with the substitution to head coach Hugo Perez.

61st minute: A pair of substitutions for the hosts, as Bryan Landaverde is replaced by Darwin Ceren, El Salvador’s most capped player, who is making his 86th international appearance, passing Alfredo Pacheco for the most all-time. Tamacas also goes, and Roberto Molina takes his place. As the substituted El Salvador players take an eternity to leave the field, tempers erupt.

For the United States, Paul Arriola replaces a dissatisfied Tim Weah.
IN THE 59TH MINUTE, THE UNITED STATES OF AMERICA HAS A CHANCE! Yunush Musah is so near to saving it, but it’s saved! Musah was in a fantastic position to equalise after a wonderful run and one-two with Tim Weah, but Mario Gonzalez gets off his line smartly and smothers the attempt. It’s the biggest chance the US has had so far, but the visitors are still ahead.

IN THE 51ST MINUTE, THE UNITED STATES OF AMERICA HAS A CHANCE! Jesus Ferreira makes a terrific run and grabs on to a McKennie through-ball, around the goalie effectively, but he’s forced to a tight angle and his shot is cleared off the line.
El Salvador’s players began flopping into the mud on the next corner, either to waste time or to get a yellow card. Neither has a positive outcome.

49th minute: It’s unclear why, but Bonilla gets enraged with the referee. He’s enraged, berating the official, who lets him go for a while before yanking him back and telling him he’s had enough. Somehow, there isn’t a yellow card for disagreement.

46th minute: With the second half ready to begin on this dreadful field, Gregg Berhalter has substituted Jesus Ferreira and Weston McKennie for Haji Wright and Brenden Aaronson. As the US returns to a 4-3-3 formation, they appear to be pre-planned substitutions.

As the second half begins, it appears like the rain has ceased for the time being. The United States wears white jerseys that are immaculately clean. I would not wish the first half kits on my worst enemy, so please pray for the kit man.

HALF-TIME: El Salvador leads 1-0 to the United States.
Nations League The United States stands to gain very little, and this is evident. In appalling conditions, Ethan Horvath let up a terrible goal to Alex Larin, who did a fantastic job of exploiting the situation.

Otherwise, evaluating the US after the first 45 minutes would be difficult, and evaluating the US after the final whistle will be even more difficult. Don’t hold your breath for much.
45 minutes plus one minute: Since the goal, the game has degenerated again, and Reggie Cannon receives a yellow card for dragging Jairo Henriquez down the line. El Salvador will get a late free kick at the end of the half…
GOAL, EL SALVADOR, in the 35th minute! A STUNNING DEFENSIVE GOAL! Alex Larin displays a dazzling moment of brilliance in a game of mediocre quality and circumstances. Larin, 29, sees Ethan Horvath move slightly off his line, expecting a cross back into the area, and instead dives for goal from an impossible angle and saves it.

Horvath, who is on trial for both club and country, is in no man’s land, which is a horrible look. He gives up the first goal in the United States’ four summer matches. Nonetheless, Larin’s attempt is of the greatest calibre, taking advantage of the limited opportunity.
IN THE 32ND MINUTE, THE UNITED STATES OF AMERICA HAS A CHANCE! Oh, Haji Wright squanders a great opportunity. He moves Roberto Dominguez to the outside to create one-on-one space, but with enough room to fire, he rockets his shot wide to the left. Wright must respond to Jesus Ferreira’s four goals against Grenada and add his name to the list of front-line options for the United States.

Following a collision with Tamacas, Christian Pulisic is down and gripping his ribs.

28th minute: There is a brief pause as Tamacas needs treatment after being kicked in the head by Tim Weah during a play in the El Salvador box. Let’s take another look at the El Salvador pitch, which…is fast deteriorating. It’ll be a surprise if there’s any green left at the end.
IN THE 23RD MINUTE, THE UNITED STATES OF AMERICA HAS A CHANCE! Haji Wright is unable to find a free man in the middle of the box, so Dominguez makes a last-ditch tackle to thwart a brilliant counter-attack by the United States.

Nations League With the ball bobbling about the area, Yunus Musah gets a golden chance, but it deflects off the El Salvador goalie and goes over the bar.

16th minute: El Salvador, you have a chance! Cameron Carter-Vickers fumbles a ball over the top into the penalty area, but escapes with a yellow card. Although it appeared that the Celtic defender had slid slightly, Tamacas was able to get a shot on goal. Carter-Vickers clears it because he misjudges it as well. The United States is going through a period of uncertainty.

Brenden Aaronson is hacked in the aftermath and receives a foul on the edge. He is enraged and demands that Cristian Martinez be given a yellow card.

10th minute: Pulisic grabs a Musah pass in the El Salvador area and is scythed down by Bryan Tamacas, but the referee waives it off. That appeared to be a solid call for a penalty in real time, but no American players gave it their all.

After taking a late kick-out from Kevin Reyes, Pulisic is now coated in mud.
7th minute: As the United States takes the game’s first corner, the referee has an argument with Alex Larin, who is battling Carter-Vickers in the El Salvador box.

The corner is taken by Christian Pulisic, and it’s a bad one. Again.
3rd minute: The Fox broadcast crew verifies that Gregg Berhalter has already switched to a 4-4-2 formation owing to the pitch circumstances. Pulisic and Haji Wright start up front, with Aaronson out wide left. The United States has little to gain from tonight’s match other than CONCACAF experience and learning how to persevere in the face of adversity as a team.

Tyler Adams has already completed the front of his whole album Nations League.

2nd minute: The hosts earn their first chance as Nelson Bonilla breaks free and sends a soaring header wide left. Bonilla had a rough time getting free from Carter-Vickers’ rear shoulder when he headed on net from so far out. El Salvador is pressing the pace early on, and it shows no signs of slowing down.

1st minute: We’re off and running in a muddy, wet Estadio Cuscatlan. The pitch has already been demolished and has yet to be used. The number one priority tonight is to avoid any injuries.

6 minutes to kick: With the United States set to kick off in El Salvador, Mexico can’t earn all three points against Jamaica, as El Tri is held to a 1-1 tie. Mexico has been abysmal this summer, with their World Cup preparations falling short of expectations. Tata Martino is facing a lot of criticism. With England and France both struggling recently, teams all around the world are discovering that pedigree only goes so far. To this time, the United States has been clear of any serious summer snafus. That will be put to the test tonight in less-than-ideal conditions in a difficult away match.
Kickoff is in 29 minutes: The match will begin at 10:06 p.m. ET, giving the players a few additional minutes to prepare.

Your weather forecast for the match: it’s not looking good!
Goalkeeper Ethan Horvath takes the squad out onto the damp and soggy San Salvador field with 31 minutes to go. Horvath will get an opportunity to demonstrate not just Gregg Berhalter, but also Nottingham Forest, that he is deserving of a starting spot. As he stated in his pre-match press conference yesterday, his club position is up in the air.
El Salvador’s lineup is presently in place with 55 minutes to go. Christian Martinez joins the Selecta midfield while Mario Gonzalez returns to his customary position in goal. El Salvador’s assault is led by captain Nelson Bonilla, who is backed up by Jairo Henriquez and Kevin Reyes.

With 71 minutes to go, the United States’ Nations League starting lineup has been announced. Christian Pulisic is back in the mix beside Tim Weah, with the two individuals we previously know about, Wright and Horvath. In lieu of Weston McKennie, who is currently recovering from an injury, Brenden Aaronson gets another start in midfield. Due to injury, Walker Zimmerman and Malik Tillman do not dress, while George Bello is the third scratch.
El Salvador’s team has arrived at the stadium in San Salvador, with 89 minutes to go. The team has gone undefeated in its last two matches, both against Grenada, but has only won one of its six 2022 World Cup qualifying matches.

120 minutes to kick: Canada was defeated by Honduras in San Pedro Sula yesterday night in terrible weather, and it looks that the United States will face a similar situation. The United States is plainly attempting to accept the situation.