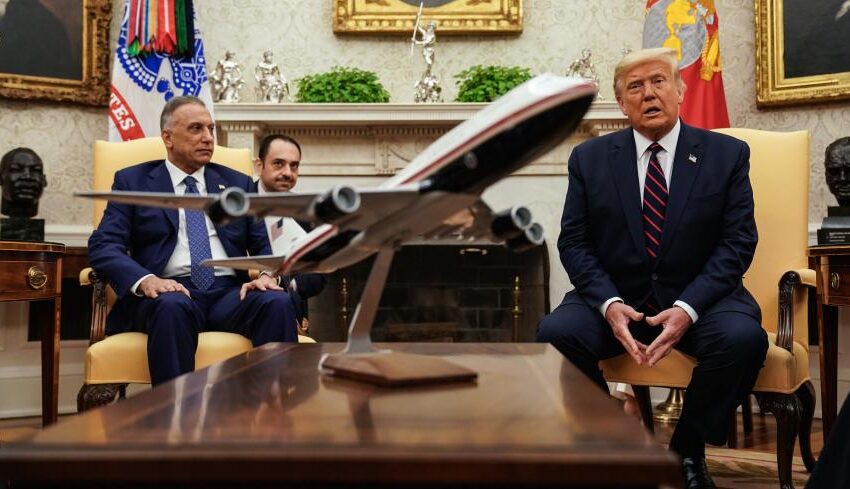 Protoday247 News Desk: Iraqi Prime Minister Mustafa al-Kadhemi will be visiting the United States this week to meet Donald Trump for the first time, with important issues, including the withdrawal of US troops, high on his agenda. Attacks on American interests by pro-Iranian militants have increased in recent weeks.
With Tehran and Washington competing for influence in Iraq, the gulf between pro-Iranian factions and Baghdad’s US-friendly prime minister is growing. When Kadhemi meets Trump for the first time on Thursday, the Iraqi leader’s top agenda is the presence of 5,000 US troops deployed in his country. Kadhemi, who assumed office in May, faces threats from the Hashed al-Shaabi forces, a alliance of Iraqi militia organizations with strong links to Tehran. Hashed al-Shaabi is part of the Iraqi state, and its political representatives have called for the expulsion of US troops.
Pro-Iranian factions were hit hard by Washington’s January assassination of one of their chiefs, Abu Mahdi al-Muhandis, in a strike that killed Iran’s top commander, General Qasem Soleimani. The Hashed denies any link to a recent spate of anti-US attacks, but videos and social media claims point to their involvement through groups operating under other names.
“The people that make up the current militias are more likely to be selected from the ranks of the pre-existing militant organizations that make up the Hashed al-Shaabi,” said Ramzy Mardini of the Pearson Institute at the University of Chicago. Kadhemi — far closer to Washington than his predecessor, Nuri al-Maliki — has angered armed groups by seizing border posts where they ran lucrative smuggling networks and taxed traders.