Daren Sammy is honored with the 'Sitara-e-Pakistan' award.

Daren Sammy is honored with the ‘Sitara-e-Pakistan’ award.

Daren Sammy shared a photo of himself getting the award on Instagram. And  along with a lengthy message praising Pakistan’s government and people. 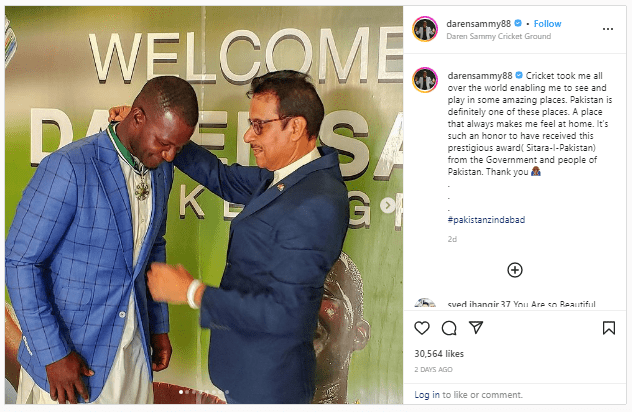 Daren Sammy, the former West Indies captain who led the Caribbean squad to two T20 World Cup victories, shared a joyous moment on social media on Monday when he was awarded the civil honor of ‘Sitara-I-Pakistan‘ for his contributions to restoring international cricket in the Asian country. Sammy shared a photo of himself getting the award on Instagram, along with a lengthy message praising Pakistan’s government and people.

“Cricket has taken me all around the world, allowing me to visit and play in some incredible locations. Pakistan is unquestionably one of them. A spot where I always feel at ease. It is a great honor to get this renowned award (Sitara-I-Pakistan) from the Pakistani government and people. Thank you very much “Sammy penned the piece.

With West Indies, Sammy won the ICC WT20 title in 2012 and 2016. At a period when West Indies cricket was in free collapse, he was given the skipper of the team. Also, his cool and collected demeanor aided the squad in resuming its winning ways in bilateral cricket and ICC events. 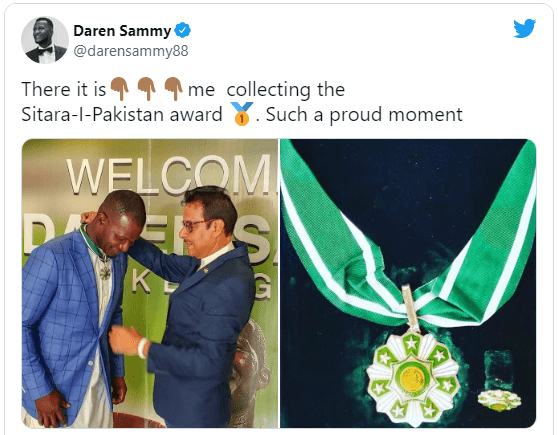 Darren Sammy represented West Indies in 38 Tests, 126 ODIs, and 68 T20Is as an all-rounder who could bowl decent medium pace and swing his bat well down the order.

Moreover, he’s played T20 franchise cricket for teams all around the world, including spells in the Indian Premier League.