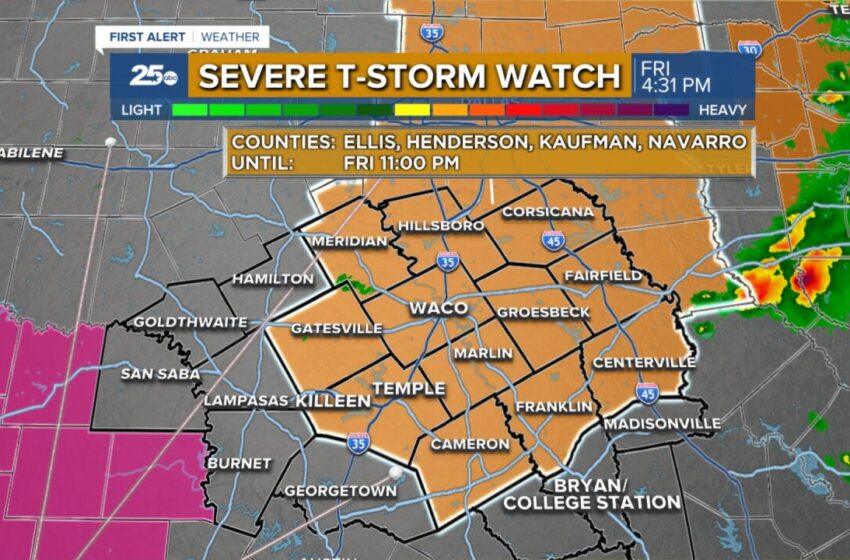 Central Texas is under a severe thunderstorm

Through 10 p.m. Tuesday, a severe thunderstorm watch has been issued for the western Hill Country. The I-35 corridor will very probably be included in the watch overnight Tuesday and into the early hours of Wednesday morning.

For much of the northern half of the Austin viewing region, there is an increased danger of severe weather, with a small risk for the rest.
This line of thunderstorms also poses a modest danger of flash flooding, as high humidity will allow for very heavy rain, and rain-train effect thunderstorms could deliver 2-6 inch rainfall totals in certain areas.
Strong and severe thunderstorm have formed in west Texas, and they will progressively coalesce into a line that will rip into the Hill Country.

The biggest and most widespread consequences will be strong winds and flash floods, however the risk of a tornado will remain high as the line passes across central Texas.

Storms are expected to hit the Hill Country about 8-10 p.m., Austin between 11 p.m. and 1 a.m., and coastal plain cities between midnight and 3 a.m.

After the initial line of storms passes, the rain will taper down to a constant light to moderate rain for an hour or two. By Wednesday morning, the rain should have stopped along the I-35 corridor. By midday Wednesday, any lingering rains near the coastal plain will have passed.

See also  McDonald's in Russia has unveiled a new logo