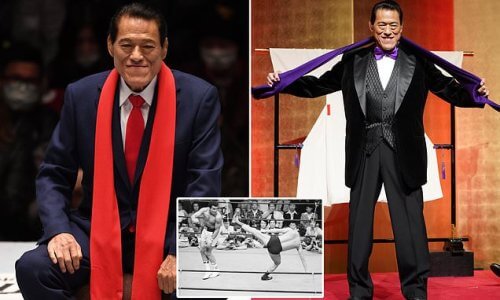 Antonio Inoki, a pioneer in combat sports, passed away at the age of 79.

Antonio Inoki, a pioneer in combat sports, passed away at the age of 79.

Antonio Inoki, a pioneer in combat sports, a powerful politician, and a legendary character in his home Japan, passed away on Friday at the age of 79. The organisation he created, New Japan Pro-Wrestling, made the announcement.

Inoki passed away for an unknown reason, however he had recently developed health issues and was confined to a wheelchair.

Inoki ended his political career in 2019. Inoki was one of the most well-known figures in Japan during his lifetime and had a profound impact on many aspects of Japanese society, but his work in combat sports as a professional wrestler, promoter, and fighter—most famously, his match with Muhammad Ali—is what made him most renowned.

From the 1970s and on, Inoki was the most significant professional wrestler in Japanese history, selling out innumerable arenas and stadiums. He was inducted into the WWE Hall of Fame in 2010 and was also the first Japanese wrestler to win the WWF championship (albeit the reign is not now acknowledged by WWE).

Inoki faced Ali on June 26, 1976, in what was arguably the most well-known mixed-rules matchup in history. Inoki has experience in judo and amateur wrestling. He studied with catch wrestler Karl Gotch and created a fighting technique he named “strong style.” Of course, Ali was at the time one of the best boxers in the world and extremely well-known on a global scale.

What we currently know as mixed martial arts, which has developed into a worldwide sport lead by the UFC, formed in 1993, has its roots in Ali vs. Inoki. One of the most seen fights of its time, the contest. It was broadcast on closed-circuit throughout the world in addition to the sold-out audience of more than 14,000 in the Nippon Budokan in Tokyo.

With an undercard of pro wrestling and mixed-rules events, Shea Stadium in New York hosted the fight on its big screen and attracted a crowd of 32,897 spectators. Although the fight between Inoki and Ali finished in a draw, Inoki spent the most of the 15 rounds on his back, kicking Ali’s legs more than 100 times. Ali suffered injuries to his legs throughout the fight and endured significantly more punishment than Inoki did.

The most popular combat sport of the period, especially in the United States, was by far boxing.. However, Ali vs. Inoki gave many people the idea that perhaps boxing wasn’t the best style to win a more fluid, all-encompassing fight. This debate persisted for years after Ali vs. Inoki until the birth of the UFC.

Carlson Gracie, the father of Brazilian jiu-jitsu, once referred to Inoki as “one of the finest fighters” he had ever seen. UFC champion Conor McGregor frequently mentioned Ali vs. Inoki in the lead-up to his historic boxing contest with Floyd Mayweather as an inspiration. McGregor was referring to the crossover fight with Mayweather.

In a press conference prior to his fight with Mayweather, McGregor remarked, “Ali tried to reach down and hit and he ended up getting swept.” “Inoki eventually came out on top, and the official immediately separated it. If that same moment had let go for five more seconds or ten more, Inoki would have wrapped around his neck, arm, or other body part, and the entire nature of warfare would have altered on the spot.”

See also  Here's what the red-hot CPI data has to offer in terms of inflation!

Ali vs. Inoki was much ahead of its time in the contemporary combat sports world, where it has become routine for boxers to battle MMA fighters, pro wrestlers to fight YouTubers, and so on and so forth.